I love Jennifer Moore’s historical romances. This newest one–Charlotte’s Promise–is set in 1814 in New Orleans and the surrounding seas during the time the British navy was causing havoc in the United States. Covenant publishing is giving away a paperback copy of this book, so make sure to enter the Rafflecopter giveaway at the end for a chance at winning. Woohoo! END_OF_DOCUMENT_TOKEN_TO_BE_REPLACED

I’m participating in another blog tour this week and am excited to share this new book with you. The Shipbuilder’s Wife by Jennifer Moore was SOOOOO good!!!! I read it in just over a day. It was super hard to put down because the plot was so new and intriguing.

The day of her parents’ garden party dawns bright as Lydia Prescott eagerly anticipates a marriage proposal from a handsome and wealthy plantation owner. The lovely debutante plans to steal a moment away with her beau, but her plans go terribly awry. Instead of her intended, she is joined by a stranger—the largest man she’s ever laid eyes on. And it is clear Jacob Steele is there for reasons far more sober than the party. With British raids erupting all around them, it is his job to reassure plantation owners of their safety. In reality, however, Jacob is an espionage agent, and the truth is dire: America is on the verge of invasion by the British. Blissfully unaware of the danger surrounding her, Lydia basks in the glow of her recent engagement. But her joy is short-lived—a surprise British attack results in a devastating wound, and her plans for the future are shattered. Lost in her devastation, Lydia could never dream that Jacob, that giant of a man she met so briefly, would prove to be her saving grace. And with a war raging around them, she may be called upon to save him too. END_OF_DOCUMENT_TOKEN_TO_BE_REPLACED

Here’s the latest by Jennifer Moore. I love her historical romances, and this one was set in a unique period of time. Canada. Early 1800’s when England fought against the States (again). I love learning about small pieces of history through fictional stories, and this nibble of history I hadn’t run into before, so I wanted to share. Here’s the synopsis (And don’t you LOVE that cover?): 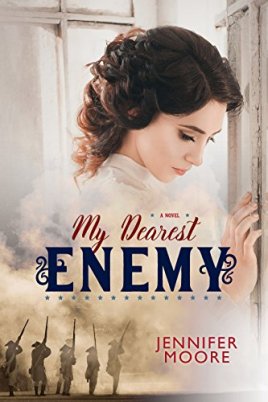 Struggling alone on the family farm, Abigail Tidwell knows exactly who to blame for her hardships: the Americans. If it weren’t for their part in the war, her father and brothers would be home rather than fighting abroad. But no amount of antipathy could have prepared her for the shocking sight of a wounded American soldier on her property, a man in dire need of her help. Grudgingly, Abigail tends to the soldier’s injuries and anticipates the satisfaction of turning him over to the authorities once he is healed. But fate has other plans. Captain Emmett Prescott remembers little of the ambush on his men by a group of Shawnee Indians and even less about how he arrived in the unfamiliar barn. END_OF_DOCUMENT_TOKEN_TO_BE_REPLACED

Time for another book review. This new one my Jennifer Moore is set in the Scottish Highlands in the 1800’s. She has written lots of historical romances set in different parts of the British Empire, and I’ve read a lot of her books and always like them. Here’s the blurb for Miss Leslie’s Secret: END_OF_DOCUMENT_TOKEN_TO_BE_REPLACED

Here’s a unique book set down under in Regency times. Sarah Whitaker travels from England to Australia (which is called New South Wales at this time period) as a little girl to see her father. But when she learns that he has died just a few weeks before she arrives, her and her aunt are placed in a tough position. Australia is filled with criminals shipped  there from England, but Sarah believes in her heart she must run her dad’s sheep ranch to honor his memory. END_OF_DOCUMENT_TOKEN_TO_BE_REPLACED

This newest story by Jennifer Moore was amazing. I’ve read a lot of her books, and they always make me smile. She writes great characters, fantastic settings, and believable romances that are usually set in the Regency period in the 1800’s.

Lady Helen Finds Her Song is set in 1813 in India. Lady Helen has just arrived in Calcutta with her mother and her new husband, Brigadier-General Stackhouse. She finds herself fascinated with the exotic splendors of India, but her fellow British expatriates END_OF_DOCUMENT_TOKEN_TO_BE_REPLACED

Time for another book shout-out. When the chance to read and review Simply Anna by Jennifer Moore came, I jumped on it. Everything I’ve read by this author has been amazing. She writes great historical fiction. This romance set on a Jamaican sugar plantation in the 1800’s starts off with a splash…literally. Anna falls overboard in a storm somewhere near Jamaica. When she washes ashore END_OF_DOCUMENT_TOKEN_TO_BE_REPLACED

I like Jennifer Moore’s stories. I’ve read several and have posted about them in the past: Becoming Lady Lockwood, Lady Emma’s Campaign, and Miss Burton Unmasks a Prince. These books were set in the 1800’s, but this new one is a contemporary romance. So fun!

Shelby wants to break away from the mold of her small town and make a name for herself in the big-city journalism world. While skiing, she meets mysterious stranger Hakim who is actually the prince of the Middle Eastern kingdom of Khali-dar. When his enemies learn of Hakim’s connection to an American girl, they target Shelby. Fleeing to the safety of Khali-dar, Shelby falls deeper in love not only with the prince, but with his country. As she struggles END_OF_DOCUMENT_TOKEN_TO_BE_REPLACED

I always look forward to reading a new book by Jennifer Moore. In the past, I’ve reviewed Becoming Lady Lockwood and  Lady Emma’s Campaign  by her and both stories had characters I came to adore. Her newest regency romance was the same. In this one, Meg has sailed from colonial America (Charleston) to sacrifice herself upon the altars of the English ton in hopes of ensnaring a rich man to marry and save her merchant family from financial ruin during the time when England has just declared war upon America and is seizing merchant ships and forcing men into the English army.

Prince Rodrigo of Spain has also come (or fled, really) to England because his country is being ripped apart by Napoleon’s armies END_OF_DOCUMENT_TOKEN_TO_BE_REPLACED

After the election ruckus we just endured, please rest assured that this campaign isn’t a political one. Whew!! I just finished reading this regency romance set in war torn Spain. This has a few of the same characters from Becoming Lady Lockwood, which I reviewed HERE, but it isn’t a sequel. It’s a stand-alone story. END_OF_DOCUMENT_TOKEN_TO_BE_REPLACED