I have a great book giveaway today! This is by one of my awesome writer friends, Amanda Sowards. She writes thrilling historical fiction that you seriously can’t put down. Read on to learn more, and enter the Rafflecopter giveaway at the end of this post for a chance to win a copy of this great murder-mystery. Good luck!!!

Loss is inevitable, as Evie Hampton knows all too well. But despite losing her mother to cancer and her older brother to a war, she knows she’s one of the lucky ones. After all, she still has her father, a distinguished professor of medieval history. And she has Gary Redhawk, the man she loves despite the emotional scars he carries from the Second World War–and despite her father’s opposition to their relationship.

When Evie’s car suddenly careens off the road, she chalks it up to poor maintenance or sheer bad luck making another appearance in her life. Little does she know a host of hardships is just beginning–the car was her father’s, and the brake lines were deliberately cut. Someone wants them dead–but why? All fingers point to Gary, a man with a troubled past and no solid alibi, but Evie is unwilling to believe he’s involved. Determined to uncover the truth, she begins to piece together a startling picture of deception and vice. But as she closes in on the truth, it is clear that someone is determined to silence her–and the next attempt on her life may be a deadly success.

Praise for The Redgrave Murders:

“A compelling love story blended with a suspenseful mystery and sprinkled with WWII history. The Redgrave Murders kept me reading into the early hours.”
–Jennifer Moore, award-winning author of Becoming Lady Lockwood and The Shipbuilder’s Wife

“A. L. Sowards is a master at weaving stories set in the past. This time,she has crafted a murder mystery set in a post-World War II town laden with trauma and prejudices, resulting in a multilayered whodunit that will chill and intrigue both history and mystery fans.”
–Stephanie Black, award-winning author of Mind Games and Not a Word

“Known for her award-winning historical novels, A.L. Sowards has ventured into a new genre, historical mystery, and proves that yes she can deliver compelling reads in both. The Redgrave Murders is a solid murder mystery highlighted with in-depth research of post WWII. I highly recommend it.”
–Kathi Oram Peterson, award-winning author of Bloodline and A Familiar Fear

This murder-mystery-romance was super captivating. It takes place in post-WWII upper-state New York and has an intriguing premise. The characters are Evelyn Hampton and Gary Redhawk, a bi-racial couple (white girl, American Indian boy) in a time when that was not acceptable. Gary has an uphill battle to climb in society. Indians were looked down upon as lazy, no-good drunkards. But Evie sees Gary’s strengths–his love for her, his intellect, hard work, and his respect. He’s a war veteran and a POW who’s endured a lot and has many demons she knows nothing about..…until the mystery and horror unravels. Evelyn’s father is found murdered in his house. Doubt and circumstantial evidence stacks up against Gary. He’s thrown in jail, which freaks him out because he has PTSD and can’t stand to be behind bars and bullied by the biased police. Evelyn determines to prove his innocence, but as she works to establish his alibi, weird, scary things keep happening. It seems as if someone wants Evelyn dead. Or Gary. Or both. Why?

This book kept me guessing clear to the end. The mystery was fantastic. I loved it. Each side character introduced seemed like a reasonable suspect. As the plot thickened, I didn’t know who-dun-it! But the mystery wasn’t the only thing I loved. The characterization was phenomenal. The author delved deep into Evelyn’s and Gary’s lives to flesh them out into believable and heart-tugging characters that stuck in my heart long after the story ended. Gary’s Indian background was explored, and I loved the theme of how biased Americans were to Indians in the first half of the century. I learned a lot from the background history details. Gary’s demons and pain became mine; I agonized with him as he strove to rise above them. The prose was beautiful as well. So many powerful quotes and passages that I wanted to outline. I also loved the romance. It had great tension and heart-wrenching drama. I also loved how the story was organized. There are letters between Evelyn and her brother Clive from 5 years in the past at the beginning of each chapter. They tangle into the present-day drama. There was nothing I disliked. Nothing! I highly recommend this superb book! One of the best who-dun-it mystery/romances I’ve ever read, filled with enriching little-known historical details, fantastic characters, powerful passages, heart-wrenching drama, and plot twists that kept me turning pages long into the night. 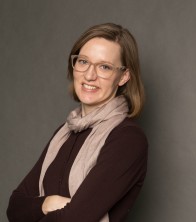 A.L. Sowards grew up in Moses Lake, Washington, then came to Utah to attend BYU and ended up staying. Now she’s a busy mom with three children and a head full of story ideas. She enjoys reading, writing, learning about history, and eating chocolate, sometimes all at once. As an author, she is known for heart-pounding action, memorable characters, careful historical research, clean romance, and family-friendly language. Her novels include a Whitney Award winner and several Whitney finalists. 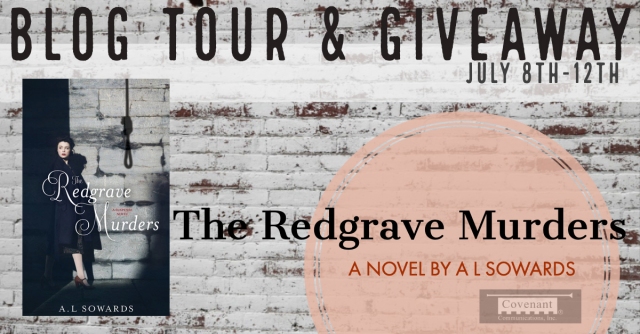 Enter a Rafflecopter giveaway for a chance to win a paperback copy of this book from Covenant. The publisher will contact the winner to award the prize. I’ll keep my fingers crossed fro you.

4 thoughts on “The Redgrave Murders”