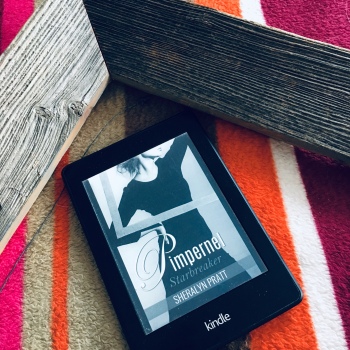 Here’s my last January read that thrilled me!!! Pimpernel: Starbreaker by Sheralyn Pratt. This is the 3rd book in the Pimpernel series. If you haven’t read the others, I will put my plug in for them. They’re super, super good!!! I’ve reread them all (except this last one), and my love just keeps growing for the characters in these stories. This author is amazing!

Vic Davalos is one of the most successful models of her generation. She’s also scheduled to be taken out by a hitman by the next new moon.

Jack Cavanaugh, also known as the Pimpernel, has less than a week to change the woman’s fate. The Cupid who brings Jack this news insists he must save Vic so true love can succeed in bringing two soulmates together who will change the world for the better.

While Jack is always happy to stop a murder, his personal motive is to catch the Starbreaker that’s been hired to make sure Vic Davalos doesn’t survive past the new moon. Statistically speaking, saving Vic and catching the Starbreaker is an impossible feat. If historic lore is to be believed, no one has caught a Starbreaker since the 1700s. They are notorious for never leaving fingerprints on their handiwork and, therefore, leave no trail to follow.

A Starbreaker has to be caught in the act, or not at all.

The chances of Jack succeeding with an extemporaneous plan and only the assistance of his new Shade, Kali, are so close to zero they aren’t even worth calculating.

But he has to try.

Three thumbs up! (I don’t have three, but I’ll borrow someone elses for this book) The world of the pimpernel is quite simply—awestriking. In this book, we have the Pimpernel, of course, and Kali (she’s super awesome). Yet, they aren’t the main stars in this thrilling, spine-tingling adventure. Our hero and heroine are two new players in the game. Seba, or Sebastian, is a high stakes forger, and ultimately, conman. When he gets a letter that Vic, Victoria, a world-renown model, will be killed in a week’s time unless he does something, he doesn’t know what to think. Two years ago, he kissed her…and was promptly fired from that job by her father and hasn’t seen her again. But he’s never been able to stop thinking about her. Vic’s life is run by her controlling step-dad, who seriously is a psycho. Evan Bauers gave me the shivers. But with the pimpernel and his sidekicks on the job, and enlisting Seba’s help, they may be able to not only save Vic’s life, but capture a starbreaker as well, something that hasn’t been done for over 300 years. Get ready for the ride of your life with this one. It’s pretty dang awesome.

Let go of your secrets, baby girl,” she said, her hand gesturing like she was letting go of a balloon. “Secrets are highly charged fears and, the more charged something is, the brighter it burns. And heat knows heat, which means the very first thing any true Heart knows of you is the love you hold and fears you hide. They glow for us—calling like a lighthouse to your harbor. And once we tangle with your heart, we’re in. So you must be very careful about how you choose to hide a thing.” – Wanda

Almost dying was at least good for something: perspective. Vic had a lot of it now and the only question in all of it was whether she wanted to go through the effort of removing Seba from her updating fantasies or letting them play out.

I find it helpful not to think of the past as who I am, but as experiences I can access and use however I want,” Margot replied. “Experience can be wisdom, if we let it be. Or it can be an eternal wound for the same reason.”

If you’re in between books and are yearning for a thrilling romance, you can’t go wrong with this one. You can follow Sheralyn Pratt on Amazon, Twitter or Facebook. Happy reading!