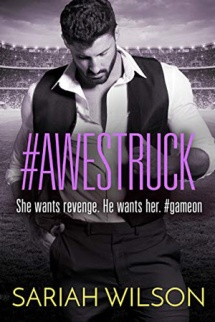 January was filled with a bunch of GREAT new releases that have kept my kindle full, and my heart happy. Today, I’ll start off by reviewing #Awestruck by Sariah Wilson. If you haven’t read one of her books yet, you’re missing out. Here’s the skinny on her newest hit:

Ambitious intern Ashton Bailey is about to get closer to her dream of being a sports announcer. All she has to do is prove that too-perfect-to-be-true NFL quarterback Evan Dawson isn’t quite as wholesome as his contract requires. It’s also the perfect opportunity to get delicious payback on the boy who broke her teenage heart. At least that’s her plan. But she forgot just how easy it is to crush on the irresistible charmer. #OhNoNotAgain.

Evan has a knack for getting through the opposing team’s defenses, and he won’t let this tall, redheaded knockout be the exception. He’s determined to make things right between them and earn back Ashton’s trust—and maybe her heart, too.

Then the press mistakenly announces their engagement, and Ashton and Evan find themselves going along with the lie. Now the whole world is watching as Ashton flirts with attraction and disaster. But while revenge is sweet, it just might come at the cost of something sweeter still.

Totally 5-Stars–all the way across the board. This series of celebrity romances by Sariah Wilson are incredibly fun! This one features NFL star quarterback, Evan Dawson, and aspiring sports announcer, Ashton. When her boss at the Sports network wants to prove Dawson is lying about being a virgin, she sends Ashton out to get the story. Ashton has incentive, since she was in love with him once upon a time, and he humiliated her in the worst possible way back in high school. She’s carried a festering grudge against him for the last ten years, and would love to be the one who knocks him off his pedestal. But things aren’t always as they seem.

This was a super fun book, with sassy, strong characters that I grew to adore. The scenes are fun and witty. The romance sizzling, yet clean. The story line seemed believable to me (I always suspend a little bit of reality with these super star/girl-next-door type stories, but I didn’t have to suspend too much belief on this one). Wilson captured my heart once more, and it was hard for me to put this story down once I started. I cheered, I ached, I bristled, I swooned. Lots of emotions. Perfectly done romance. I have nothing but good to say about this one. Another winner for this author.

I grabbed Evan by the shirtfront and pulled him into the empty gym. I held still in the dark, listening to the sound of too much lip gloss and low self-esteem passing us by.

Like Dad always says, nothing truly great came from a comfort zone.” – Aubrey

Because call me crazy,” he said, putting his hands on the side of my car, effectively trapping me in place. I tried to back up but was met with a wall of metal behind me and a wall of muscle in front. “But I think we’re having a moment.” – Evan 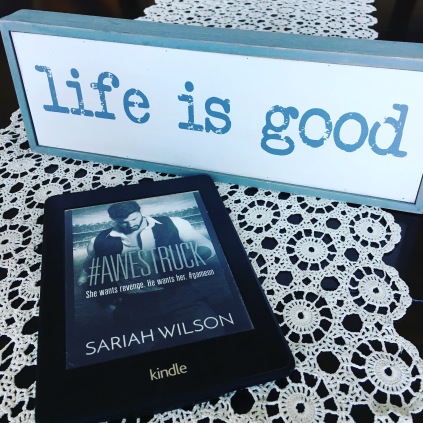 Stay tuned for more great books to be featured later. I’ve read 3 amazing books this month and can’t wait to share them all with you. For now, if your kindle or heart are empty and cold, check out #Awestruck. You won’t be sorry.