I’ve fallen out of the blogosphere, but have a good excuse (at least to me). My family went to California. Now, I won’t tell you that it was before Thanksgiving and I don’t really have an excuse for not blogging since except that I’m technologically challenged when it comes to getting pics off my husband’s phone to put on here. I won’t tell you either that I haven’t even tried to figure out how to get them off his phone…because then you might think I’m lame.

So since you don’t know about my laziness or techno-handicap, I will excuse myself because of vacation.

Our family loves Disneyland. We don’t go a lot (maybe every couple years), but when we go, we do the park HARD and make the most of our time there. At the end of each night, our feet burn, our legs drag, and we sound slightly like moaning zombies.

Still…best vacation EVER! Here are some highlights from our trip:

We were first in line.

On our magic morning, we made it onto seat 1 and 2 of the first car that took off for the new Hyperspace Mountain ride (Star Wars Themed). That is something to brag about because in order to do that, we had to be first in line at the park gates (which made for an early morning)…and then we had to speed walk faster than all the other people who were first in line in other stalls as we crossed the entire park to get to that ride before all of them (that was the ride everyone was trying to get to first–that and Peter Pan, which we hit about 10th in line the day before). Boo-yeah!

We ate the best food ever!

In the past, we’ve pretty much subsisted on granola bars and Rice Krispy treats to save money. Since we only had two kids this time, we decided to splurge and see what the park had to offer. Surprisingly, it has lots. My husband perused Disney blogs and made a list of the best places to eat…and we tried to hit as many as possible. If you’re trying to save money, don’t do this. Go the granola bar route. But if you have some cash to burn, try these places:

Taken from Disneyfoodblog. Check out this site for pics and reviews of park food. This was the best fried chicken I have ever tasted in my life. I did NOT want to share.

Courtesy of the Disneyfoodblog. I am addicted to this site. This was my 2nd favorite meal…the Monte Cristo sandwich and pomme frites-fancy french fries that my family fought over.

Since you all know I suffer from a completely oversensitive sweet tooth, other delicious snacks were cinnamon rolls (oh my deliciousness!), Mint Juleps (a refreshing drink for hot days, which we had in November), and these babies:

Churro…you cannot have just one.

My best advice for eating at Disneyland is to not be on a diet. Savor the magic. Outside the park in Downtown Disney is the Rainforest Cafe. This jungle themed restaurant is one of my favorites. I had the Maui Meatloaf and it was quite flavorful. And having a life-size gorilla next to us shaking the palm trees and grunting wasn’t bad either.

Besides having their whole 60th Anniversary going on, Disney introduced Power of the Force the week we went. They upgraded Space mountain to be Star Wars themed, as well as added extra scenes to the Star Tours ride. Stormtroopers marched the street looking for rebel spies and we got to meet Chewbacca. The real deal. I know he was real because I hugged the furry beast and he did one of his Grahhhalehhgh growls. Can’t get more authentic than that.

Even though there were bigger crowds than we expected the week before Thanksgiving, we didn’t wait much. The park had every ride open and working at maximum capacity (something they don’t do when crowds are less). Overall, I think we did as good as when the park crowds are low.

When we arrived at Huntington beach, we noticed a helicopter circling the ocean. Being curious, we walked over to see if we could spot a shark, or a person drowning, or a beached whale…something interesting enough to grab a helicopter’s attention.

We saw nothing, but since a bunch of surfers had vacated the waves and the lifeguard truck drove over and sent a lifeguard into the water with a jetski to troll the area, we figured it must be a shark. Right?

But when the helicopter and lifeguard left and the surfers began to do their thing again, we figured it must have been a false alarm. Other families arrived who hadn’t seen the drama…and they skip-hopped their way into the waves with their little kids.

It was hot and perfect beach weather, so my kids started playing in the waves too, but not too deep since we still wondered what had been up with the helicopter and jetski. As more time passed and the lifeguard trucks didn’t seem concerned about people being in the water, my husband and kids went deeper. 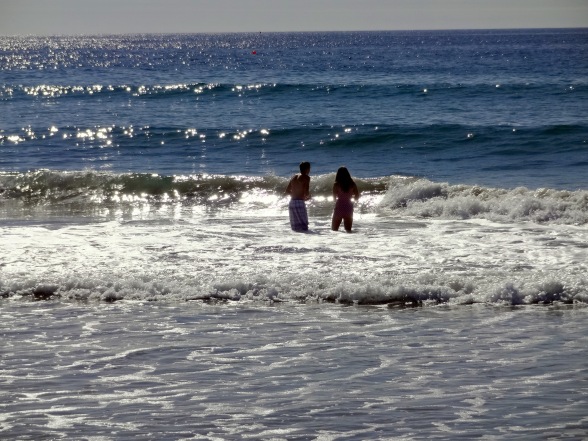 Then the lifeguard truck returned and parked by me. I was enjoying the beach, because I don’t like California ocean (it’s dark, murky and cold).

The lifeguard asked if those people in the waves were with me. I nodded. He then told me they had spotted a great white shark half an hour ago right where they were playing.

I felt a little sheepish, because I knew that was right where the helicopter had been, but we’d been too lazy to move and there were others out deeper, so I figured they’d get eaten first if a shark really was there. (Sorry if you’re reading this and realize you were the other family by us. Yes, I was totally willing to let you guys get eaten first to warn me of danger).

So I stupidly ask the lifeguard, “Should I tell them to get out?”

He said, “The water’s not technically closed, but I wouldn’t want to be out there.”

Oh. That was a kind way to say DUH, LADY.

So I walked down to the water…

And JAWS jumped out and ate my 15 year old right before my eyes!!!

My family met me and asked what the lifeguard said. When I mentioned the GREAT WHITE words, my son (the very son whose greatest goal is to go shark cage diving) said, “I’m out of here!”

We vacated the water, but the surfers didn’t. I guess they’re more fearless than we are. I’m glad my son isn’t a surfer. Of course, that sport is hard to get into in Idaho.

And now you know why I haven’t blogged. My absence can be blamed on Disneyland…Star Wars…and great white Sharks.

What have you been up to? Would you have played in the ocean like we did after seeing the helicopter…or are you smarter than my family? Do you watch Shark Week each August? Have you ever hugged a Wookie? Do you believe in the magic of Disney like me? Please share.

26 thoughts on “Disneyland, Wookies, and Sharks…oh my!”