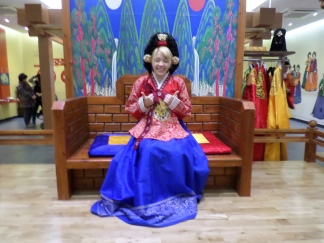 My daughter returned from South Korea last month. She served a mission for our church there for 19 months. It’s been nice to have her home again (even if she must now leave again for college). She has made me laugh at how shocked she’s been by everything here in the U.S. after being away for so long.

She thought it was cold here when she walked out of the airport. The temperature was in the high 90’s. But she left a Seoul summer which was maybe the same temperature, but extremely high humidity. She said she was soaking wet all the time and none of her clothes ever dried out. It’s dry here too, which is freaking her out. She can’t drink enough and applies lotion constantly–but her skin still feels like it’s scaling out on her.

She thought it smelled weird here too–like dust and bread (and she didn’t sound complimentary). Hmmm. I guess it’s what you get used to. I’m definitely not used to the smell of kimchi in my fridge since she returned. Every time she opens the bottle, that spicy strong scent permeates my house. 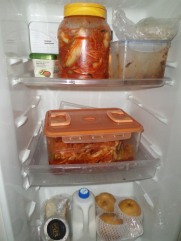 a fridge full of kimchi = happiness to my daughter

I thought she’d be all excited to eat American food again…but so far, she has only survived because we have a kind friend from church who has brought her several types of kimchi and we have also visited the Asian market. Our food seems to make her sick. Koreans love their food…and my daughter now loves their food too. She might have a rough time of it at college when she has even less selection of Asian food in a smaller town.

Another thing that baffled her was how much space is here. She kept commenting how short the buildings were and how many open fields and dirt lots there were. “Koreans would grow so many crops here” or “So many people could live here” were oft repeated phrases.

We do live in the west…in Idaho. Yes, there are wide open spaces (thank goodness!). And no, we don’t see the need to build skyscrapers. There’s plenty of room to sprawl outward. But since South Korea is about the size of Utah, and there are many more people there than in Utah…they build upwards and grow vegetables in any small scrap of available dirt. A five foot plot of earth between buildings will have Korean grandmas planting food in it. Everyone grows things in balcony containers. Open space has shocked my daughter.

Traffic shocks her too. She’s afraid to drive because she says for the last 19 months she has only had aggressive driving as an example. Supposedly, Koreans drive crazy and drive their cars on the road wherever there is space…and if there isn’t, it’s not uncommon to drive up on the sidewalk to get where you are going. According to my daughter though, they have way less accidents than we do here. Go figure.

One amusing thing that happened at a store was when we were walking out the exit. I paused to let another man enter with a big filled shopping cart. He said “Excuse me.” and my daughter asked afterward…”Why did he excuse himself? There was plenty of room for us and even more people to go out.” I guess in Korea, you push and shove as part of life. If you say “excuse me” you are basically admitting to doing something wrong. They never say excuse me. And they push and shove and don’t find that rude at all. Very different from here.

It’s funny to watch her adjust to her own culture again. She ate everything fed to her and grew to love most of it. The only foods she wasn’t fond of were raw, fermented sting ray…steamed silkworms….and bloody pig intestines. Her palate can definitely take a lot more spice and heat than before she left. We went to a Korean restaurant in town and she rated the food only about a 7 out of 10 that we could barely digest. In a sushi restaurant, she used all her Wasabi, 3/4 of mine, half of my son’s and 1/2 of my daughter’s until her soy sauce/wasabi mixture looked more like pea soup…and she said she still wouldn’t mind if it was hotter.

Have a great week.