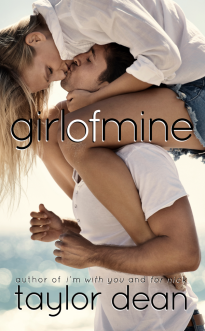 I’m super excited to announce the release of Taylor Dean’s new book, Girl of Mine. Taylor’s a super fun author friend of mine. I beta-read this book and LOVED it! She’s a great writer. I’ve read all her books and love the unique stories she creates.

It’s a fast-paced read that switches back and forth between present day and past and between love and heartache. The story starts out with desperate action as Luke kidnaps his ex-fiancée in order to explain choices he made that he sincerely regrets. Jill doesn’t know if she can ever forgive him for breaking her heart…and besides, she’s now engaged to another man, Troy’s best friend. Luke and Troy have been best friends since they were in diapers. A tragedy in their youth changed both of their lives, leaving one bitter and the other filled with guilt. The characters in this romantic saga are well-developed—even the villain will claim a piece of your heart—and you will lose your heart in this emotional journey. I highly recommend this book to all those who love to read about once in a lifetime love that can endure any challenge or hardship and forgiveness and letting go of painful memories and grudges.

(Muscles and sinew, ruggedly attractive, masculinity at its finest.)

This is a pic of a model. Don’t know his name, but he’s perfect for Troy.
A note from Taylor Dean:
My hubby served in the Army and has been gone twice for long periods of time. Once he was gone for three months in Korea. We would’ve been separated for a year, but he was able to make arrangements for us to join him, thank goodness.
The second time he was gone for 14 months to Iraq.
In Girl of Mine, Luke comes home on leave, traveling with other soldiers. A news crew is there to record the precious moment. While the news crew is filming and interviewing the other soldiers and their families, Luke and Jill sneak away and avoid being interviewed by the news.
In the broadcast that evening, the other soldiers and their families are featured in a touching segment. As the screen goes black, the newscaster says, “And Lucas Graham came home too.”
Awkward at best, right?

Image courtesy of [Gualberto107] / FreeDigitalPhotos.net
This is a TRUE story. This happened when my hubby came home from Iraq. We grabbed our chance to sneak away, not wanting to be on public display during a very emotional moment.
Later, some friends told us about the newscast. As the screen went black, they announced my hubby’s name.
It always gives us a good giggle and I couldn’t help including this story in GIRL OF MINE.
Although this story is not specifically about the war, I give special thanks to my hubby for his invaluable knowledge of the war in Iraq and the enlightening stories he was able to come home and share with me. And now you have the privilege of hearing a few of those stories in GIRL OF MINE.
Just a few though, because, well, that would be another entire book altogether—and this is a romance novel.
Most of all, hubby, thank you for coming home.

I hope you get to read this unique love story…and don’t forget to enter the Rafflecopter $100 Giveaway (Ends 6/15/2015). Taylor’s books are the best kept secret out there! Let’s make them more well known! Have a great week!