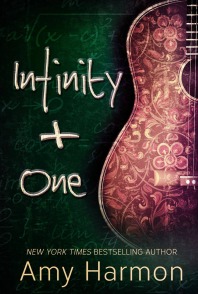 Yea!!! I can buy this book now. Amy Harmom is one of my favorite authors, so I’ve been excited about this release date for months.

Finn Clyde is a nobody. He’s broken. He’s brilliant. He’s impossibly cynical. And all he wants is a chance at life.

One girl. One boy. An act of compassion. A bizarre set of circumstances. And a choice – turn your head and walk away, or reach out your hand and risk it all?

With that choice, the clock starts ticking on a man with a past and a girl who can’t face the future, counting down the seconds in an adventure riddled with heartbreak and humor, misunderstanding and revelation. With the world against them, two very different people take a journey that will not only change their lives, but may cost them their lives as well.

Infinity + One is a tale of shooting stars and fame and fortune, of gilded cages and iron bars, of finding a friend behind a stranger’s face, and discovering love in the oddest of places.

“I look like a boy, don’t I?” Bonnie burst out suddenly, the quivering of her lower lip back in full force. She set her pizza down abruptly and grabbed a napkin, wiping her hands and face with agitated motions.

“I was getting in the shower . . . and I caught my reflection from the corner of my eye, and I screamed! I screamed ‘cause I look like my brother Hank! I look like Hank, and I always thought he was the homely one in the family.”

“What the . . .? Is that why you were crying? Because you think you look like Hank?” Finn tried not laugh. He did. He tried. But he was not successful.

“It’s not funny, Clyde! I didn’t want angel curls anymore, but I didn’t think about the consequences of short, brown hair on this square, Shelby face. But now I know.” Bonnie hung her head and her shoulders shook as she dissolved into noisy sobs. She seemed almost as alarmed by her tears as he was, and she shot from the bed and into her room without another word.

He didn’t go after her. He wasn’t her mother, her twin sister, or the guy she was sleeping with. He was just . . . Clyde. And he didn’t have a clue what to say. He could say she didn’t look like a boy. Because she didn’t. At all. Her hair was short and that was where the similarity ended. But he didn’t think he could support his argument without pointing out her more womanly attributes, which was a very bad idea. So he stayed on his side of the door and worried. He had no wisdom where women were concerned, especially a woman he hardly knew, who had literally fallen into his lap, and who he now felt strangely, infuriatingly, responsible for.

Amy Harmon knew at an early age that writing was something she wanted to do, and she divided her time between writing songs and stories as she grew. Having grown up in the middle of wheat fields without a television, with only her books and her siblings to entertain her, she developed a strong sense of what made a good story.

Amy Harmon has been a motivational speaker, a grade school teacher, a junior high teacher, a home school mom, and a member of the Grammy Award winning Saints Unified Voices Choir, directed by Gladys Knight. She released a Christian Blues CD in 2007 called “What I Know” – also available on Amazon and wherever digital music is sold. She has written five novels, Running Barefoot, Slow Dance in Purgatory, Prom Night in Purgatory, the New York Times Bestseller, A Different Blue, Making Faces and most recently, Infinity + One.

If you haven’t read any of Amy’s books before, you’re missing out. She not only tells a great story, but writes it in such a way that you want to quote her. Her themes are inspiring and uplifting! So enter the giveaway below and check out Infinity + 1.