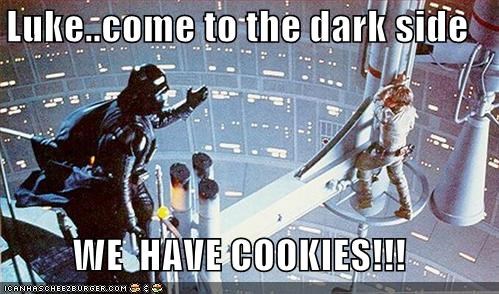 Human beings (and even dark lords) have a basic need to draw others to ‘their’ side. Darth Vader wanted Luke to come to the Dark side (and I think he would have succeeded had he thought of the cookie idea). Politicians spend gazillions of dollars swaying us to come to their side (very similar to the dark side). Television stations spend lots on advertising to gather viewers. Even school coaches rally students to join their sport–football, cross country, or the grueling chess club. And I’m no different…because today, I am going to try to encourage you to come to the RIGHT side. The right side of SEEING.

I hate when people look at something I’ve drawn or painted and sigh and say, “Oh, I wish I could do that…but I can’t even draw a stick figure.”  They feel that drawing is a talent you either have or don’t have.  But that’s not true!  What if I never tried to learn Spanish because I don’t already know it?  Silly, huh?

If you’ve ever wished you could draw, and thought it impossible, I would recommend the book, Drawing on the Right Side of the Brain by Betty Edwards.  It will change your whole outlook on art; it did mine.  The premise of the book is that the ability to draw depends on the ability to see the way an artist sees.

Most people think almost completely with the left side of their brain—their logical side.  When they are told to draw a person, instead of seeing that person for who they really are, their logical side says:  ‘A body has a head that’s round, two eyes, a nose, mouth, etc.’

We draw a stick figure with all the parts we logically know are there.  When we draw a hand, we know it has five fingers and hurry and draw that, without letting our creative side of our brain guide us.

This book has great exercises to teach you how to make the switch from your left to the right side of your brain.  If you’re like me, you’ll be amazed by all you come to see as you draw a hand—all the wrinkles, contours, shadows, texture…which when you put down on paper, form a hand of substance, instead of those cartoon hands you’ve normally drawn.

Even if you’re not into art, I think learning to see with your right side of your brain is important.  Everyday items and people become more beautiful and wondrous, instead of being taken for granted.  Everyone has a right side of their brain (unless you’ve had brain surgery and had a big chunk of it removed…then you have a few other problems I don’t want to deal with here); we just aren’t used to using it very often.  School and society push us to use our left side almost exclusively.  But the right side is there and your life will be greatly enhanced if you learn to use it to see creatively.

So come to the right side. [insert heavy Darth Vader-like breathing here to make me sound more intense and serious. Thank you.]

19 thoughts on “Come to the RIGHT side”