I just finished a series of posts on breaking pebbles into sand in order to fit them into your daily jar.  But, what do you do when you can’t break something up—like cooking for an elephant?

I went to Girl’s Camp last week and cooked for about 300 people.  There was no way to break that task up into bite size pieces.  All week I felt like I was feeding an elephant…and he was ravenous!

There were 6 of us cooks—and we were, in my humble opinion, quite AWESOME! 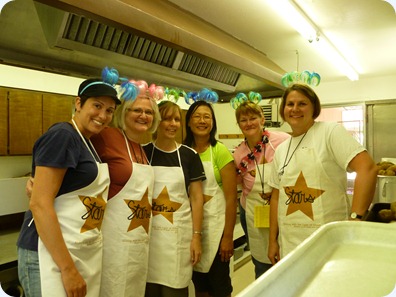 Singe‘em was our fearless leader.  She gets the Superman award because of all she did—before and during camp.  She never lost her temper (even though we definitely had reason to at times), and kept us from boiling over (literally).

Smash ‘em wins the PomPom award. She was determined that we would be happy cooks, so she came up with funny cheers that we chanted whenever someone gave us a Thank You. She taught us dance moves for roll call (which me and Scorch ‘em were terrible at—but Scorch ‘em at least made up for it with awesome jumps)

Lick‘em gets the Double Duty award. She not only was assigned to be a cook, but also was in charge of 20-30 girls as well during the day. She ran herself ragged going between each of her duties. Each of my fellow cooks taught me so much during this brutal week, and I admire Lick‘em for her patience and good attitude; she never complained.

Burn‘em made me laugh.  She’s from Singapore and can look all serious, but then whips out a smart aleck remark like, “No speaka Englees!” when she didn’t want to do something (even though she speaks English fluently).  We would roll on the floor laughing (figuratively, because in our mountain kitchen, we dealt with mice and I wouldn’t have rolled around on that floor for all the money in the world) 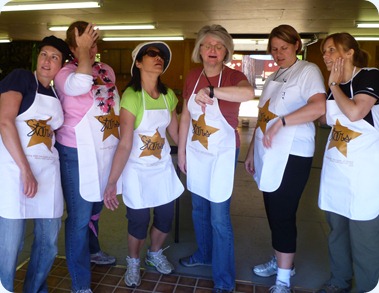 Char ‘em was me! If this had been a reality show, I would have been the weakest link and been voted off (which would have been the greatest award ever, now that I think about it). I scorched a pot of chili and it took us all week to clean the pan! Only once during the week did a small fire start on the stove—during my watch. I freaked out and luckily, it burnt itself out. Whew!

Scorch‘em gets the “You’re my Hero” award! She brought up a huge trailer for us to sleep in (and when we took a rare nap during the day, it even had A/C—immense luxury!) She definitely is not EVER getting voted off the island! Her trailer helped us get all the dang food up there and take the leftovers back; and it had utensils to use when we couldn’t find forks to shred pork (what kitchen doesn’t have forks? ANSWER: Lame ones like ours).  Scorch’em saved our sanity!

So, if you ever have to cook for an elephant…or 300 girls, here are my suggestions:

10.  I know I skipped 8 and 9, but I just fed 300 girls for the week, and I can do what I want now. This last advice will save your life…or at least your feet and back. When asked to feed an elephant…or 300 people…JUST SAY NO! It works for drugs, and cooking for 300 people is almost as scary and dangerous.

You can thank me later for all this valuable advice. Just don’t ask me to cook for you (I’ve learned #10 very well…plus, I burn chili).

32 thoughts on “Cooking for an Elephant”