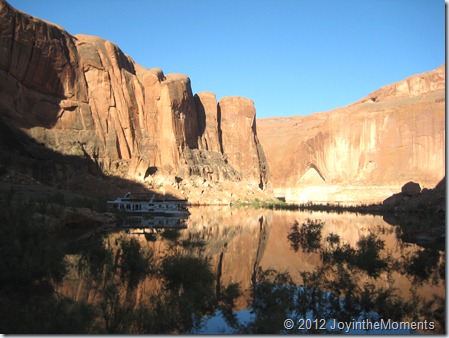 When I left off last time, we had just turned off the main channel and headed down a jiggy-jaggy canyon to start our Lake Powell adventure. This photo shows where our final destination.

Our good captain pulled in, turned off the motor, and the men went to work anchoring the boat.  They did this by taking huge stakes and pounding them into the ground to keep the boat from floating away.  Once they were in, boulders were placed on top to secure the stakes.

Lake Powell is a working vacation for adults.  For kids though, it is a blast!  They don’t have any work or worries, like adults do.  My kids rate Lake Powell as their 2nd Most Fun Vacation ever (right after Disneyland.  Nothing tops Disneyland.  It’s illegal even to think such a thing). 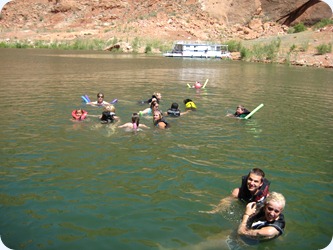 So while the guys slaved away, the kids jumped in the green lagoon and had the time of their lives.  Even the dog jumped in and had fun (he devoured 2 of our tubes; I guess he had it in for them).

The temperature was in the 80’s…absolutely perfect.  We slept outside on the top deck at night and watched the show in the sky–millions of stars and the whitest milky way rainbow I’ve ever seen (besides the one in the Sinai).  During the day, we played and swam…and life was good.

But Lake Powell has a dark side–just like the Force in Star Wars.  In those desert canyons weather and water conditions can change really fast.  One day, this happened to us.  Perfect weather…then clouds moved in…and BAM–we were in the middle of a hurricane (except we were thousands of miles from any ocean–but don’t get technical). 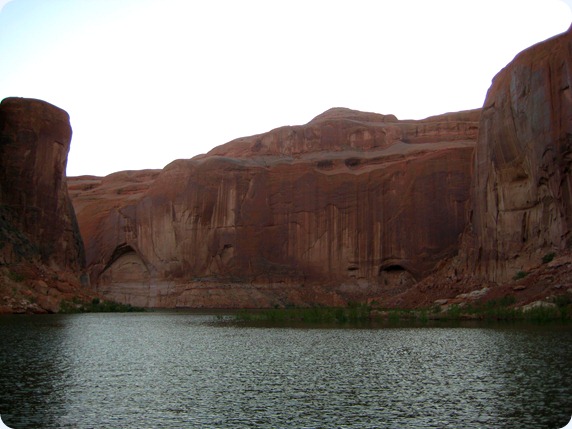 I was in the bathroom when suddenly the boat lurched and I almost fell. Kitchen cupboards banged open; dishes fell out.  I ran to see what was going on and found Captain Craig at the wheel of the ship frantically trying to start the behemoth.  It wouldn’t start.

He panicked because the kids were swimming nearby (the storm had come upon us THAT fast).  The boat had come unanchored and was drifting into the lagoon toward them.  Adults screamed for them to swim away…and they were trying, but have you ever tried to swim in a flotation device?  It’s hard.

The engine still wouldn’t start. The rest of the guys were trying to untie the speed boats, but they didn’t get one undone in time, and the houseboat rammed into it.  The other boat got loose and raced over to rescue the children and move them to safety.  Whew!  Meanwhile, the rest of us on the houseboat watched in horror as our nightmare continued:  engine failure…gale-force winds…rammed boat…and we were being pushed quickly toward destruction.

When we hit into the red, jagged cliff–the noise was awful.  The ladder on the back of the houseboat ripped off as the wind dashed us twice more into the cliff.  And STILL that sorry engine wouldn’t start, leaving us sitting there like a 3 ton duck (with clipped wings)…wishing we could get our quacker started.

Finally the engine roared (or quacked) to life and Captain Craig got us out of there.  Whew again!

About that time (5-10 minutes had elapsed), the wind died down…the clouds moved on, and all was calm and peaceful once more.  We looked at each other with befuddled stares and tried to still our beating hearts.  Then we laughed (that nervous, crazy laughter that happens after you’ve just survived a near-death experience).

Then we set about trying to figure out what had happened.  The micro-storm hadn’t been what unanchored us–even though the winds were extremely powerful.  What happened was that the lake had been rising about 3-4 feet a day.  The beach we’d anchored to jutted out into the lagoon, so for several days, water had seeped underneath, slowly eating the land away and making a juicy, muddy slop of the rest of the earth we had stakes in.  When the winds hit…we didn’t stand a chance.  The ground was saturated.  The stakes and boulders slid out easily, like stealing candy from a baby–except a little muddier.

I guess it could have been worse!  No one was hurt–just some boat and houseboat damage.  Whew!  This vacation was a WHEW vacation.

We anchored up again on the other side of the canyon–to solid mega-boulders that weren’t going anywhere even if the water rose.  No more stakes!  Stakes are sorry–except when you add an E and make them a juicy Tri-tip–then I quite like them. 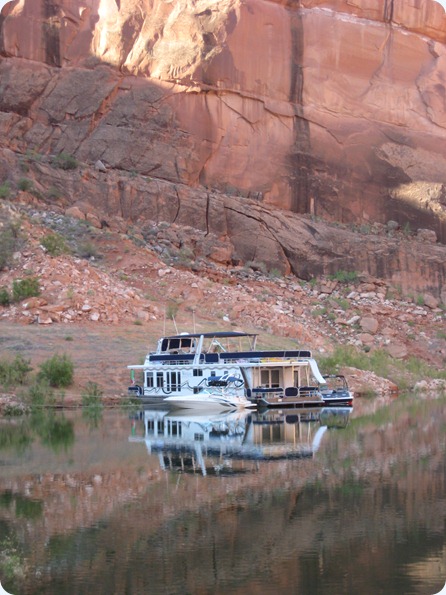 After that crazy storm, my relatives told other tales of near-death experiences and freak storms they’d endured at Lake Powell over the years.  I was befuddled by their love of the lake.  It sounded more and more dangerous to me–especially after witnessing the fury of the turning weather.  But my relatives still LOVE that lake…even with all the dangers and risks.

If you go to Lake Powell thinking you’ll relax and tan the whole time…think again.  Yes!  It’s beautiful.  Yes!  You can have TONS of fun!  But don’t go into a Lake Powell trip unprepared and unwilling to work hard.  You need a lot of guy muscle to be safe.  But if you go prepared and mindful of dangers, you can have a blast.  The next couple posts will spotlight some of the fun…and reveal the mystery thing the guys forgot to check before we left the marina (I haven’t forgot).  Until then, watch your stakes…or steaks, if you’re grilling.

***Additional Note (3/14):  My husband just told me that they did not drive STAKES into the ground…they drove huge ANCHORS into the ground, and that these were torn up when they were yanked out by the boat and wind.

What I said back:  “Same difference, right?”  (Women don’t care about names of tools or metal things.  We really don’t.  I think that drives men crazy.  For all you men out there…I’m sorry.)