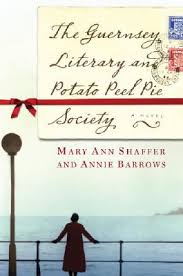 This week (the 2nd week in January) has been designated WRITE A LETTER WEEK.  I don’t know who gets the job of making up these weird holidays and tribute weeks and months…all I know is that I envy them.  How fun it would be to go to work each day and just think up nonsense to celebrate.

Personally, I think Grunt is a suck-up…but maybe that’s why I don’t get a raise.  But, forgive me, I’ve digressed.  It’s WRITE A LETTER WEEK and probably Give Your Boss a High Five Day somewhere.  In honor of this week, I thought I’d do a handy dandy book review on The Guernsey Literary and Potato Peel Pie Society (don’t you love its name?).  You’ve probably already read it…but if you haven’t, GO DO IT NOW!  It’s the best!

Most people probably don’t know how to write letters anymore since email and texting have taken off…but in the old days—when I was a kid and walked uphill to school both ways four miles in a snowy blizzard in Las Vegas…in the summer—we wrote letters to our grandparents, to pen pals we met through 2nd grade writing projects, and to senators and congressman to tell them we thought they were awful lawmakers.

Since writing letters is now a lost art, and I don’t feel like giving you a writing lesson on how to do it, I’m just going to refer you to this book instead.  It’s chalk full of letters and telegrams (but no emails or text messages…sorry LOL).  This is old school…and charming beyond belief.  The whole story is told through a series of letters between a variety of characters (and they are characters, believe you me!  You will fall in love with them if you haven’t already read it and done so.  I think my favorite is Isola—she’s a nut!)

The story begins in January 1946, when author Juliet Ashton is emerging from the dark days of World War II looking for a new piece to write about.  She exchanges a series of letters with her publisher and then receives an unexpected query from Dawsey Adams on the island of Guernsey in the English Channel, which sparks off a delightful web of letters and vivid personalities as Juliet travels there looking for inspiration.  I ate this book up (and was too full to eat my normal pumpkin soup.  It was that good!).

The title is very applicable to the book, but I don’t want to spoil anything for you if you haven’t read it yet.  So read it!   Thanks.

6 thoughts on “Write a Letter Week! (and a little about the Grunt that makes it all happen)”